Water Resources Drilling Emergency Town Water Projects 2019 / 2020
Since August 2019 with the extreme drought Conditions Water Resources Drilling expertise in drilling town water bores has been called upon.
The Following projects have been completed.
Tenterfield Emergency Water Supply.
Tenterfield a town in the Northern part of the New England Region in NSW with a population of just over 4,000 people. In August 2019 WRD were engaged to drill deep bores in the Granite in and surrounding the township of Tenterfield at the time was on level 4.7 restrictions with water due to runout by Christmas 2019.
The project consisted of drilling 21 Test Bores. Of these 7 were converted to production bores and pump tested.
The project was successful and Tenterfield Shire Council have established five of the bores as part of a Production bore field supplying up to 15 litres per second for the town which meets its minimum requirements in drought times.
Click on link below for Drilling for water at Archery site Tenterfield
Tenterfield archery water drilling.MOV

Geurie Town Water Supply
In December 2019 Geurie a village of 755 people relies on the Macquarie River only for its town water supply. Dubbo Regional Council engaged Water Resources Drilling to drill a new deeper Production Bore to replace an old town water shallow bore not being used for at least 30 years.
A new production bore with a Cable tool Rig to 33 metres depth with Stainless Steel casing and screen was drilled yielding 10 litres per second was completed providing an ample supply for Geurie should the Macquarie River run dry as was predicted in May 2020 at the time of the drilling.
Nabiac Borefield Stage 2 Forster Tuncurry Town Water Supply
In December 2019 Mid Coast Water contacted Water Resources Drilling to commence the Stage 2 Nabiac Borefield. At the time the Manning River had dried up and the town’s was approaching a stage where they were going on to severe level 5 water Restrictions.
Five production bores were drilled Stainless Steel casing and screens with flow rates ranging from 14 to 28 litres per second for four of the bores. One bore only delivering 6 litres per second.
The completion of the Stage 2 drilling allows Mid Coast Water to run the Nabiac Water Treatment plant to its full capacity. 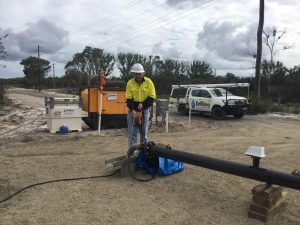 Wellington Town Water Supply
Wellington a town of just over 4,000 population was in a similar situation as Geurie dependent on the Macquarie River and if it run dry had no alternative water supply.
In March 2020 WRD replaced the old Montefiores Bore with a Cable tool rig drilling very large gravels using the mud stabilised technique. The Bore has just been completed and will be pump tested at between 45 and 50 litres per second.
Click on link Installing casing at Montefiores Bore
Montefiores running casing.MOV

Scroll to Top
We use cookies to ensure that we give you the best experience on our website. Ok